For the most recent VCF Deadline information, click here!

For the first time since being appointed in 2016, 9/11 Victim Compensation Fund (9/11 VCF) Special Master Rupa Bhattacharyya expressed concern that the fund might run out of money before the 9/11 VCF deadline of December 18, 2020.

With the fund already paying out more than $4 billion of its $7.3 allocation in compensation claims to eligible first responders and survivors since 2011, Bhattacharyya shared that “I’m starting to get a little concerned” following her periodic assessment of available VCF funds to meet both the current and projected rate of claims for compensation.

Updated statistics reveal that as of Aug. 31, the fund had reviewed over 38,000 compensation claims from victims of 9/11-related illnesses this year (20,000 of which have already been approved for payout) — a nearly 28 percent increase over the roughly 30,000 claims it took in last year — and had also seen a near doubling in the number of ‘deceased’ claims it received versus 2017.  And given that “there are diseases with long latency periods,” Bhattacharyya said, the demands on the VCF are only expected to rise.

Though over $3 billion still remains in the fund and concerns over its depletion aren’t imminent, Bhattacharyya said that she may “seek some public comment on changes that will have to be made regarding our policies and procedures” following the next assessment she publishes.  Experts suggest that a bill to extend the fund — which is only currently authorized to accept claims through the 9/11 VCF deadline of December 18, 2020 — could be brought to Congress as early as next month and many prominent politicians and media figures, including Jon Stewart and New York Governor Andrew Cuomo have strongly advocated for an extension of the 9/11 VCF deadline.

“It’s critical that full funding is available for all who need it in the years to come, and I call on Congress to renew and expand the program,” Cuomo said.  “In New York, we will always stand with the victims of the attacks (regarding) the fair and ample compensation they deserve.”

Since 2013, nearly 10,000 known cases of 9/11-related cancer have been diagnosed, a 3,800 percent increase over five years ago, and victims have also dealt with a broad range of asthma and respiratory conditions, gastrointestinal illnesses, and more.

Since passage of the James Zadroga 9/11 Health and Compensation Act in 2010 (which created the World Trade Health Center Program to provide medical testing and treatment for responders and survivors who suffered or will experience health complications and reactivated the 9/11 Victim Compensation Fund), roughly 29,000 claims have been submitted and over 14,000 victims and families of victims have received compensation from the VCF, with the average dollar value of all awards amounting to over $223,000.  The largest award to-date totaled over $4.1 million and Pitta & Baione LLP successfully obtained a 9/11 VCF award totaling over $3 million for a cancer victim they represented who was exposed to 9/11 toxins while working in an office building in Lower Manhattan during the months following the tragedy.

Will the 9/11 VCF Deadline be Extended a Third Time?

However, while this overall level of registration and claim activity may appear robust, it actually only represents a fraction of the population of affected individuals – specifically, the roughly 89,000 registrants to the World Trade Center Health Program and 29,000 claims submitted to the VCF to-date represent just 18 percent and 6 percent of the 500,000 people exposed, respectively.  For the vast majority of exposed individuals who haven’t registered with the WTC Health Program or are unaware of the opportunities available to them to receive free medical monitoring and possible financial compensation for health issues they’ve endured or may suffer in the future, time is running out, as the current deadline to submit claims to the VCF is Dec. 18, 2020.

Individuals located in the exposure zone between Sept. 11, 2001 and May 30, 2002 are encouraged to register with the World Trade Center Health Program, capitalize on free medical monitoring and treatment for a condition linked to 9/11 exposure, and investigate their eligibility for financial benefits; families of those who suffered from a 9/11-related condition during their lifetime and have since passed may also be eligible for compensation.

Eight days after 9/11, former EPA administrator Christine Whitman told New Yorkers that the dust-filled air that filled New York City’s skies was safe to breathe. We now know how shockingly false this declaration of safety was.

In fact, more people may have died from healthcare complications resulting from breathing in toxic debris than people who died in the 9/11 attacks nearly 17 years ago. According to the National Institute of Occupational Safety and Health (NIOSH), more than 500,000 people are battling cancer and other diseases linked to the toxins that poured into the air following the attacks. Of the 500,000 exposed, NIOSH estimates 35,000 will develop cancer at a rate 21 percent higher than the general population.

And unless Congress acts, these victims won’t get compensation for years of injury and irreparable damage endured from prolonged exposure to these toxins.

Ground Zero burned for 99 days. In a speech to the American Chemical Society in 2003, atmospheric scientist Thomas Cahill, who analyzed samples from Ground Zero, said the debris was essentially an enormous concoction of toxic chemicals and gases.

“The debris pile acted like a chemical factory,” Cahill said. “It cooked together the components of the buildings and their contents, including enormous numbers of computers, and gave off gases of toxic metals, acids, and organics.”

According to the National Resources Defense Council (PDF link), the 16-acre site contained 1.2 million tons of building material and contents, which burned at temperatures close to 2,000 degrees Fahrenheit along with 90,000 liters of jet fuel and 130,000 gallons of transformer oil. The “chemical factory” Cahill described was an estimated 300 to 400 tons of asbestos, 50,000 personal computers (each of which included mercury and lead), 300 mainframe computers, hundreds of miles of wires containing polyvinyl chloride, 23,00 mercury containing light bulbs, and 12,000 miles of electric cables containing polychlorinated biphenyls.

In 2003, the EPA Office of Inspector General (OIG) admitted that, in reference to Whitman’s statement declaring the air “safe to breathe” on September 19, 2001, the agency “did not have sufficient data and analyses to make such a blanket statement” regarding safety. The OIG also revealed that the White House pressured the EPA to remove cautionary statements in favor of reassuring ones.

10 years after 9/11, former President Barack Obama signed the James Zadroga 9/11 Health and Compensation Act (Zadroga Act) into law. Named for a New York City Police Detective whose death was determined to be caused by exposure to 9/11 toxins, the Zadroga Act provided for the WTC Health Program and reopened the 9/11 Victim Compensation Fund (VCF). In 2016, Congress reauthorized the Zadroga Act.

The Zadroga Act has provided $12 billion in funding for the World Trade Center Health Program and the 9/11 Victim Compensation Fund (VCF). The Health Program provides free monitoring, medication, and treatment, while the Fund provides tax-free compensation as a lump sum payment. While the WTC Health Program is fully funded through 2090, the VCF is due to expire on December 18, 2020.

Time is of the essence for workers, volunteers, and survivors to determine eligibility. Of the 500,000 people exposed at Ground Zero, only 20 percent are members of the Health Program and only 5 percent have submitted claims to the Compensation Fund. Of the 35,000 individuals projected to develop cancer, less than 1/3 have been certified by the WTC Health Program. And of the $7 billion in funding, over $3 billion has already been paid to claimants.

Individuals may be eligible for free healthcare and compensation if between September 11, 2001 and May 30, 2002 they were present:

As the deadline looms, it begs the question- will Congress let the fund expire, leaving 9/11 victims in the dust? Will the fund close before the true effects of exposure to 300 to 400 tons of asbestos are exposed? Mesothelioma, just one of over 70 cancers eligible for 9/11 compensation, takes about twenty years to rear its ugly head, but the Fund is due to expire only 19 years after 9/11.

The VCF was originally due to close in 2016. However, victims of 9/11 have had the benefit of New York’s representatives in the U.S. Senate and House of Representatives, relentlessly fighting on their behalf for health and compensation benefits, including Senate Minority Leader Chuck Schumer (D), Sen. Kirsten Gillibrand (D), then-Sen. Hillary Clinton (D), Rep. Carolyn Maloney (D), Rep. Jerrold Nadler (D) and Rep. Peter King (R). Thanks to their leadership, the VCF was extended through December 18, 2020 and the WTC Health Program was fully funded through 2090.

However, it’s important to remember that even though Congress voted to extend the Zadroga Act, 113 members of the House and 33 members of the Senate voted against it. Candidates on the November 2018 ballot need to be asked directly if they support extending the Zadroga Act or not. The future of hundreds of thousands of people depends on it.

While the WTC Health Program is fully funded through 2090, time is running out for potential victims of 9/11 toxins exposure determine if they are eligible for 9/11 victim compensation from the 9/11 VCF. The 9/11 VCF deadline is December 18, 2020. In general, individuals who were at the following locations between 9/11/01 and 5/30/02, and who developed an eligible physical condition, may be eligible for free healthcare and compensation:

Families of deceased individuals who fit the above criteria, may also be eligible for compensation. Compensation paid as a one-time lump sum tax-free payment.

Conditions eligible for the 9/11 VCF include cancer, respiratory illnesses, sleep apnea, and GERD (persistent heartburn). Families of those who have passed away, and suffered from a 9/11-related condition during their lifetime, may be eligible for compensation as well. 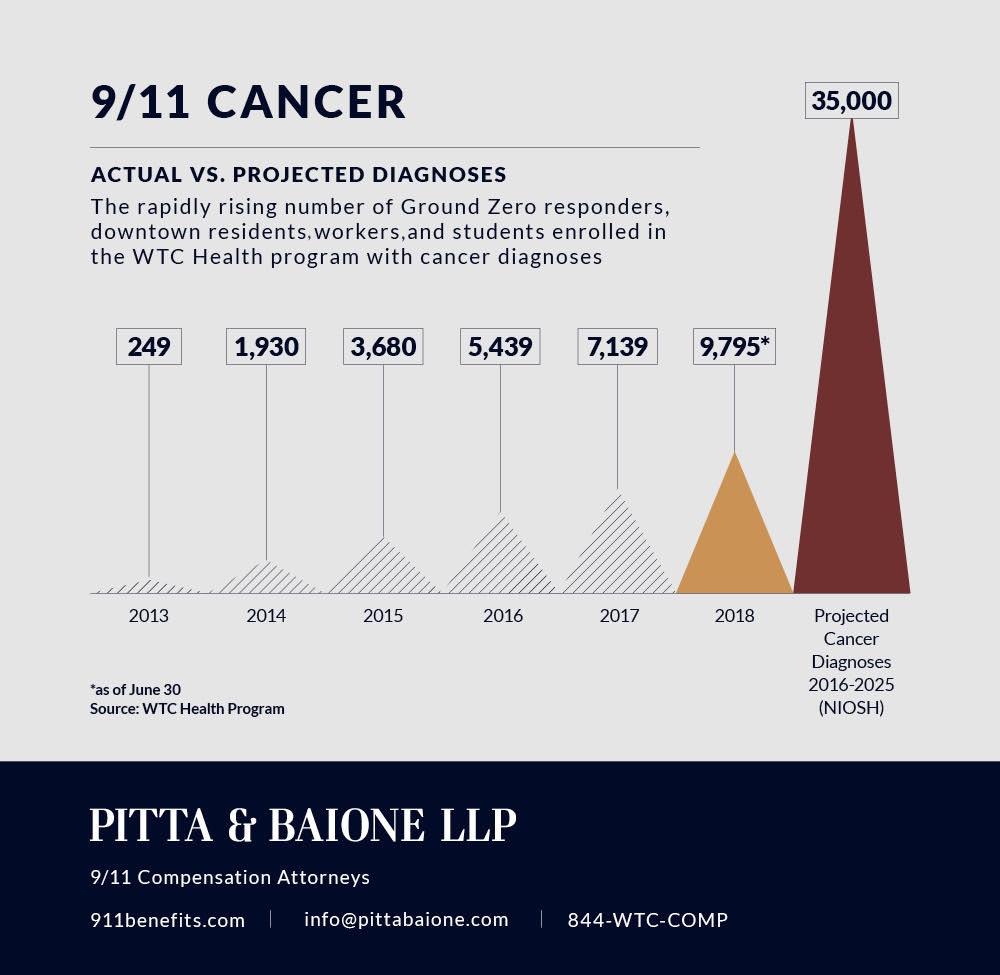 Time is of the essence, so take the important steps to preserve your health and investigate any VCF benefits that may be owed to you before the December 18, 2020 deadline — and join in the national movement to reauthorize and extend the deadline on the Victims Compensation Fund.

Contact the 9/11 Attorneys at Pitta & Baione LLP at (844) 982-2667 or e-mail them at info@pittabaione.com for more information regarding health and compensation benefits for 9/11-related illnesses.