A newly released report by the NYS Department of Health revealed that the Staten Island cancer rates is consistently higher than any other borough in New York City.

Of the total 38,838 reported occurrences of cancer in New York City in 2014, Staten Island cancer victims accounted for 2,781 cases or 7.16 percent of all New York City cases, despite accounting for only 5.5 percent of the city’s total population, according to the most recent available cancer data from 2014. 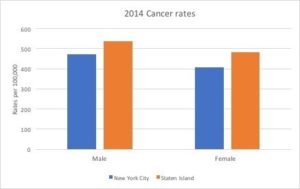 Since the attacks on the World Trade Center, thousands of police officers, firefighters, recovery workers and survivors continue to suffer from ailments linked to inhaling toxins at Ground Zero as well as the toxic debris contained at the landfill. This includes Raymond and Robert Alexander, father and son who both tragically passed away within 8 months of one another due to exposure. For weeks on end, father and son sifted through debris at the Fresh Kills landfill in Staten Island. Raymond Alexander died at the age of 76 after battling seven different types of cancer over 13 years, a disease his family says was linked to his rescue and recovery work after the 9/11 attacks. Less than a year later, his son Robert, 43, died of brain cancer, also related to 9/11 toxins exposure, his family said.

In the statement made by UFA President Gerard Fitzgerald on the Passing of Firefighter Robert Alexander, President Fitzgerald said “Ret. FF Alexander is the 11th firefighter who has passed away due to a 9/11 related illness this year. This loss is particularly heartbreaking because Bobby’s dad, FDNY Lt. Raymond Alexander Sr., died of 9/11 related illness last year. And this is the first time, post September 11, 2001, where the 9/11 attacks have claimed the lives of two generations in a single family… Due to the devastating 9/11 attacks on our nation, numerous New York City Firefighters have been getting sick and dying in high numbers due to cancers and other diseases caused by breathing the toxic air at the World Trade Center.”

Councilman Joseph Borelli’s office compiled a preliminary report examining health implications of the Fresh Kills Landfill that can be found here. However, as a result of the possible health threats associated with the Fresh Kills Landfill site, Councilman Borelli and Minority Leader Steven Matteo have called for the city to conduct a comprehensive, third-party study.

Anyone who was present in Lower Manhattan, south of Canal Street, or at Fresh Kills Landfill between 9/11/01 and 5/30/02 may be eligible for 9/11 victim compensation.

For more information about Staten Island cancer and 9/11 toxins exposure at Fresh Kills and Ground Zero, contact Pitta & Baione LLP at 844-982-2667 or info@pittabaione.com.